There have been a lot of questions arising among vaping skeptics concerning the effectiveness of e-cig as a smoking cessation tool. This is largely due to the lack of clinical trials to prove the benefits of this device to smokers. Randomized trials are majorly used to compare two or more drugs or therapies with each other or against a control.

The strict protocol of a drug trial (all participants are given the same drug at a certain dose and interval) has been the major problem with translating drug research into a consumer product. This may not lead to a product that is widely accepted. After all, vaping is less risky options for smokers and it's not a cure to diseases.

There have been several trials with smoking cessation tools like e-cigarettes before now. However, several data have collected from studies conducted in 2014 on cigar-like products. Nonetheless, the results of those studies have shown success with nicotine replacement therapy (NRT) products despite the fact those studies used the former vaping devices.

Now a randomized trial test was conducted by Prof Peter Hajek of the Queen Mary University of London. The study compared smokers trying to quit smoking with NRT and other with vaping products. Even when the participants are allowed to make just one choice, the results were highly impressive. 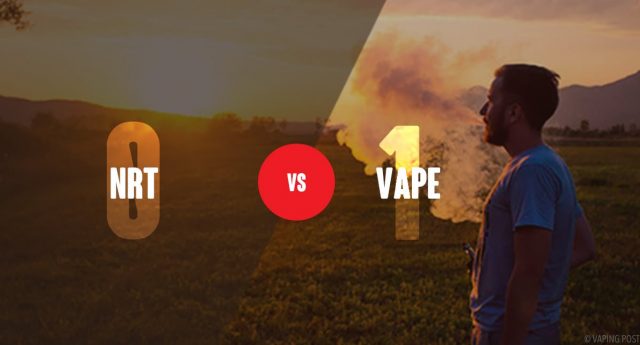 Abstinence was observed to be successful in 18 percent of the vaping group after one eats. This percentage is twice the result of what is obtained in people who used the pharmaceutical nicotine product (9.9%). (Carbon monoxide test was used to verify the evidence of recent smoking).

“Despite the low figure, the rate would be about 3% if they are quitting on their own,” said Prof Hajek. This makes vaping with proper support six times more effective than quitting with no help.

This study was published in the Journal of Medicine, but it was so embarrassing to the journal that two editorials condemning e-cigarettes were commissioned. One advocated for a vaping flavor ban while the other offered debatable advice to doctors (stressing that smokers should use low nicotine products like NRT before trying any other option).

A total of 886 smokers were divided into two groups. One group got NRT products like gum, lozenges, nicotine patches, nasal sprays, and inhalers. Smokers were allowed to make multiple choices of these NRT products for three months. The other group was given just one kit (Innokin kit 2016 or Aspire One Kit) and 18 mg/ml tobacco-flavored e-liquids in one or two 10ml bottles. Both groups were allowed to have in-person counseling sessions every week for the first month.

The counseling might have been the major success factor that helped the new vapers feels at ease, they were allowed to ask questions and interact with other vapers on forums like ECF and visit a good vape shop. Perhaps some got further help when replacing the e-liquids received from researchers at vape shop (which resulted in a 2- to 8- day supply, unlike the 90 days of NRT products the other group were offered)

The vaping group experienced reduced lack of concentration, nausea, and irritability than the NRT group. After a year, there was also a reduction in issues like phlegm and coughing in participants belonging to the vaping group.

Many vaping opponents will try to stress the fact that many vapers continued vaping after a year. Bu, the goal is not to eliminate nicotine use but to quit smoking. Vaping may stop an ex-smoker from having an urge for cigarette. Besides, nicotine does not cause any health problem.

Among those who didn’t quit smoking, 4 percent of the NRT group continued using NRY WHILE 40% of the vaping group continue to vape and smoke (“dual use”). NRT products are not attractive and do not replace the urge a smoker has for a cigarette. Those dual users may gradually limit their smoking or use of cigarette as vapers do.

The author is still interested to see how many participants in the vaping and NRT group relapse to smoking and one may continue smoking after one year. These are possibilities because some full-time vapers may spend over a year before they switch to e-cigarettes.

The headline clearly shows that more vapers were able to quit totally than NRT users. Those who weren’t able to quit within a year may still try a new flavor that appeals to them and helps them quit smoking.