Recently, researchers at George State University found that the number of adults having the belief that vaping is dangerous or more dangerous that smoking has been on the rise. The study made use of the data obtained from The Tobacco Products and Risk Perceptions Survey, which was a national online survey that included about 6000 Americans adults from 2014 through 2018.

Between 2017 and 2018, the number of American adults with a misconception that e-cigarettes is as harmful or more harmful than cigarettes has increased. This has been happening even before the national outbreak of vaping related lung disease and deaths and was reported by tobacco researchers from Georgia State University’s School of Public Health.

The findings of this researchers was further augmented by a study published in JAMA Network Open which also found an increase in the number of people that considered e-cigarettes to be more harmful between 2012 and 2017.

In 2018, 43% of U.S adults believed e-cigs to carry as much risks as cigarettes and 8% thought of it to be more harmful. This same trend was also observed among current cigarette smokers and has become an implications for decision-making for smokers looking to quit smoking and switch to e-cigarettes.

Amy L. Nyman, the lead author of the research, said: “smokers who thought e-cigarettes are associated with many risks may find it quite difficult using them to quit smoking. Instead, they may decide to stick with their combustible smoking habit.”

Nyman stated that the misconception about e-cigarettes might have increased since 2018 as a result of the recent outbreak of vaping-related illness which lead to the death of about 42 people nationwide as reported by the Centres for Disease Control and Prevention (CDC).

The probability that the results are related to EVALI is very low but have higher chance of getting influenced by the lung disease outbreak and procrastination by the CDC. All these has made people believe more that it was a vaping-related problem rather than an illegal black market of Vitamin E acetate issue.

However, it is rather shameful to see that people are being lied to and hence instill a fear in them which will keep them smoking cigarettes instead of switching to something with about 95% less risk.

When we carefully consider the number of people who have actually contracted any kind of disease through vaping, it will be hard to find any sustainable evidence proving that vaping is the one responsible. However, looking at the statistics below, the evidence of how much damages smoking can do is conclusive. 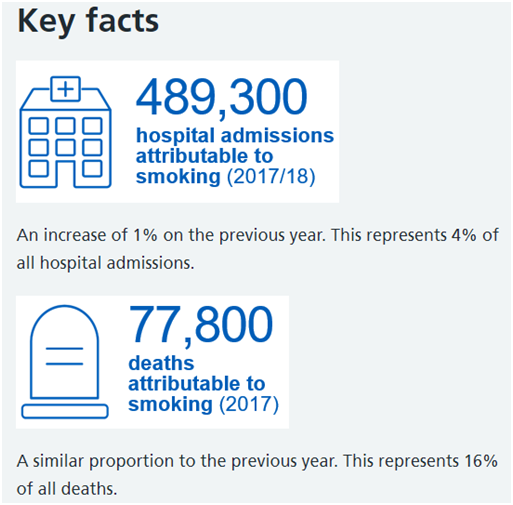